Menu
Home » What We Do » Shoulder » Frozen Shoulder 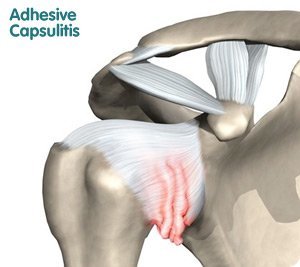 Most often, frozen shoulder occurs with no associated injury or discernible cause. This problem most commonly affects patients between the ages of 40 to 60 years old, and it is twice as common in women than in men. It is more common in people with Diabetes, Parkinson’s disease or thyroid problems. It also occurs in patients who have sustained an injury to the shoulder, or have had shoulder surgery. When a patient develops a frozen shoulder, the capsule that surrounds the joint contracts, especially at the front of the joint. The contraction of the capsule and the formation of scar tissue cause painful restricted movement. This will result in difficulty in performing certain movements and activities such as brushing hair, putting on shirts/ bras and the patient often finds it difficult to sleep, particularly when trying to sleep on the affected side.

There are three stages of a Frozen Shoulder:

Frozen shoulder treatment primarily consists of pain relief and physical therapy. Most patients find relief with these simple steps, although the entire treatment process can take several months or longer. This could be in combination with a steroid injection to aid in the breakdown of the scar tissue. Often, however, symptoms do not settle with therapy alone and surgery to release the scar tissue may be necessary.

Surgery would entail keyhole surgery to release the scar tissue. This would be a day case operation and would result in immediate improvement in the range of motion. Post-operative physiotherapy would maintain and improve mobility and strength to ensure a full and rapid recovery.